Upper Mustang Tiji Festival Trek is sacred and alluring. It is the excursion beyond mountains. Relish the unique traditions and cultural significance of the last kingdom within Nepal. The trekking during Tiji Festival Trek in Upper Mustang is considered a bonus. The local grip this Great Buddhist Guru Padmasambhava come to came to Mustang and fought with evil navies that were intent upon destroying Buddhism since the period locals have followed.

Kaligandaki Gorge, Muktinath Temple, Kagbeni and Himalayan plateaus’ landscapes are other features of trekking. Trekkers can trek in any season too. Simply ask for the Upper Mustang Trek package from our travel planners.

Tiji festival is known as ten chi among few locals it's one of the most popular centenary of the district. It recites the myth of a kid who liberated the Mustang Kingdom from a great disaster. The festival is particularly observed within the Upper Mustang belt especially in Lo Manthang’s monasteries.

Tiji got its name from the original Tempa Chirim as a short form. This also states that Tiji – Supplication for World Peace. It is celebrated for the victory of Dorjee Jonu over Man Tam Ru. The beast ate people and caused dry spell in the valley. It is believed that Dorjee Jonu is the Lord Buddha’s incarnated form and he defeated the monster.

The festival is observed for 3 days. Choedhe the priests perform the rituals. The major sequences of the festival are as follows:

Restoration of Devil to Buddha’s Domain

Upper Mustang Tiji Festival Trek is a natural excursion too. It is the trekking within the restricted trekking destination of Nepal. The trekkers are mandatory to get a special permit. However, these permits are taken cared for by the travel planners of Mountain Miracle Treks.

Book this trip for the coming year the dates of the Tiji Festival for 2020 will going to celebrate 19th May to 21st may the Upper Mustang Tiji Festival Trek in Nepal and explore the village beyond mountains. Mountain Miracle Treks has knitted the best itinerary for this trip to Nepal.

At early morning, we fly or drive for Pokhara and overnight at Hotel. Upon entry in Pokhara, the lake city offers brilliant perspectives of Dhaulagiri, Manaslu, Machhapuchhare, five pinnacles of Annapurna. After a rest you can stroll around the lake side of the city to investigate encompassing territories.

At a young hour in the morning, we take 20 minutes grand flight to Jomsom . Jomsom is the headquarter of Mustang District. In the wake of taking breakfast in the Jomsom, we begin our trek to Kagbeni. It takes around 3 and half hours to Kagbeni strolling on continuous and breezy way along the Kaligandaki waterway. The town is situated on the bank of two waterways. Old houses, Buddhist cloister and some Hindu sanctuaries are fascinating at night we investigate the town.

Our trip begins with a unique allow check up and onwards to the riverbank of Kaligandaki up stream. Amid the walk we have beautiful pleasant place to stop through the sandy and breezy trails. This trails takes after the up and downhill. From that point we trek forward to Chhusang and in the wake of intersection the stream go to the tremendous red piece of combination that has tumbled from the precipice above, framing a passage through which the Kaligandaki takes after. We go to little edges reach at Chele town.

Today, we begin our trek again and walk further to Eklo Bhatti. We move to Taklam La Pass (3,624mt) through levels and tight extends with perspectives of Tilicho Peak, Yakawa Kang and Damodar Danda. Additionally slip a little to the town of Samar. Climb the trail that goes above Samar town to the edge at that point plunging steeply to a stream. Another 3 hrs comparable walk takes us to Syanbochen. We likewise go by a give in broadly known as Ramchung Cave.

Today after breakfast, we begin our trek with tough stroll to Yamda La. Passing some Tibetan style towns, houses and Chorten, we touch base in Nyi La pass(4010mt), which is additionally the most astounding purpose of our trek. From here, we plummet to Ghami and pass arrangement of Mani Walls to achieve Charang .

At long last we get to the level of Lo Monthang, 'The Capital city and the Plain of Aspiration' of Mustang. The legendary walled city of Lo, the kingdom with a solitary passage is an appreciated sight! The ruler, "Lo Gyelbu", named Jigme Palbar Bista, still lives at his four-storied royal residence inside the walled city of Lo Manthang.

Lo Manthang the capital city of Mustang contains around 150 houses and has a portion of the biggest and finest Tibetan Buddhism gompas in Nepal. The city itself is totally entrancing spot with four noteworthy old Monasteries which are amazing and a tremendous fourteenth century royal residence forcing 4-story working in the focal point of the city.

After breakfast your pioneer will sort out a jeep for Chhosar outing.

What u see in chhosar:

• Nyphu Cave religious community incorporated with the side of a taking off bluff.

• 2500 years of age Jhong Sky Cave that has more than 44 compartments and gives u the pre notable settlement of people.

Today we will stroll to Thinkar for morning journey to see the late spring castle. Despite the fact that late spring royal residence is surrendered and not any longer being used yet its value climbing around. Then again we can move up the view point slope only north of Lo Monthang for the shocking perspective of all around the valle. Rest of our day, evening and night we will be in the castle seeing the Tiji Festival, the most recent day of celebration which typically goes up against open region outside of the royal residence.

While coming back from Lo-Mangthan, we take an unexpected course in comparison to that we dropped by. Trek to Drakmar through Gyakar with over 1200 years of age Ghar Gompa with Guru Rinpoche as the essential figure. The Gompa is additionally popular for its stone works of art. As indicated by the legend, any individual who makes one wish at the Ghar Gompa, their desire is satisfied. investigate the neighborhood. Probability of dusty breeze, so recommended to stroll in the morning.

Today, we return to Ghiling as our trip for our overnight remain after a long walk takes 5-6 hrs. After entry and lunch appreciate the day investigating the zone, yet it will be dusty breeze toward the evening, better to stroll in night time.

We re-track back to Ghiling for the overnight stop after 5 hrs walk. You will have brilliant landscape amid the adventure with a Himalayan view. Make the most of your excursion and overnight at teahouse.

Our last day of the day would be a long one. Better to walk solid start as earlier and trek to Kagbeni. Completing the upper Mustang trails and we join the typical Annapurna circuit trek. After lunch at Kagbeni will make a beeline for Jomsom for the overnight stop. Or, on the other hand, on the off chance that you can save one more day, our guide would take you to Muktinath also.

Subsequent to morning breakfast we check in the air terminal to fly back to Pokhara. A 30 min sensational flight to Pokhara between canyon of the two tremendous mountains Annapurna and Dhaulagiri. On landing in Pokhara air terminal guide will exchange to the lakeside lodging. Rest of the time investigates the lake and overnight at lodging.

After breakfast, we begin our 200 kilometers drive back to Kathmandu. Better to hang on the left sheet of the vehicle to appreciate the views through the course. To praise the fruitful finishing of our voyage, we will have a goodbye supper at night. Overnight in Kathmandu. 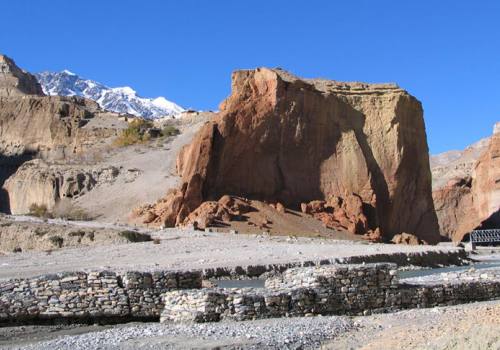