off the beaten trekking in Nepal
TRIP COST
Contact Us

Upper Mustang trek is an uncommon privilege where you will encounter the lifestyle of genuine mountain individuals, who were very little in contact with all of Nepal for a very long time. From numerous points of view, a trek to Upper Mustang is like trekking in Tibet. Upper Mustang is closely tied to Tibet in culture, language, and geography. There is a Buddhist kingdom in the upper mustang called Lo. Lo used to be part of the Tibetan empire, therefore, they are exactly close to the Tibetian culture, and villages were also built in Tibetan style (whitewashed houses). Mustang lies in the rain shadow of the Dhaulagiri and its land surrounded by rocks.

The Upper Mustang Trekking initiates from Beni (a 5/6 hour drive from Pokhara). From Beni, we follow the Kali Gandaki River upstream to Kaagbeni. it's quite hard to find stores above Kaagbeni so, trekkers need to be completely independent. The rough leave landscape of the Upper Mustang is complimented by sprinkles of green vegetation. The course, for the most part, takes after the Kali Gandaki valley and at times moves high over the valley dividers. Lo Manthang, the old capital, can be reached within four days and no less than one additional day ought to be spent here to get the sights and sound of this interesting walled settlement. Horses are accessible for you to quench your thirst for entertainment. The rerouting trail can either take a similar course while entering or, as an option course; the eastern bank of the Kali Gandaki might be taken after.

Facts: known as an independent kingdom, though faithfully tied by the dialectal very influenced by Tibetan culture and tradition. Mythical shows 15th to the 17th century, its calculated location decided the Mustang is control over the trade between the Himalayas and India.   At the end of the kingdom, it was seized by Nepal and became a reliance on the kingdom of Nepal since 1795 Ad. The Kingdom of Lo-Manthang supported Tibet and the Qing Territory during the Sino- Nepalese war. Therefore still documented by many Mustang inhabitants, the monarchy stopped existing on October 7, 2008, by order of the Nepal Government.

monsoon months (June-August) are the best season for a trek to Mustang. Upper Mustang is restricted till 1992 and it was forbidden for foreigners. Nowadays it's totally different. They welcome the foreigner and they charged US$ 500  which is valid for 10 days(arranged by the trekking agency).
Join the prolific immensely rewarding Upper Mustang restricted trek with the highly trained team of Mountain Miracle Treks & Expedition to double up the fun and adventure of this trek in a safe environment surrounded by our highly trained trekking crew to assist you through this trek.

After breakfast we start our voyage through four stunning UNESCO World Heritage Sites. These incorporate the structurally rich Durbar Square, the holy Hindu sanctuary of Pashupati Nath, the intriguing 'Monkey Temple' (Swayambunath) and Bauddha Nath Stupa which is one of the biggest stupas on the planet. Subsequent to finishing our visit late toward the evening, we drive to Mountain Miracle Treks & EXpedition's office for a concise meeting about our trek and become more acquainted with our group pioneer (guide) and kindred explorers.

We eat then leave for Pokhara, otherwise called The Lake City inferable from the substantial number of lakes in the city. Upon our entry in Pokhara, we are remunerated with grand perspectives of the Himalayas including Dhaulagiri (8,167m/26,794ft), Manaslu (8,156m/26,759ft), Machhapuchhre (6,993m/22,943ft), the five pinnacles of Annapurna and others. We at that point registration to our inn and take a rest. We appreciate drifting in the Fewa Lake and walk around the city's curious roads. Overnight in Pokhara.

Today we will take an early morning flight to Jomsom which is well known for its apples, solid breezes and the scene. We start our trek on an open trail nearby a delightful valley. We go through Eaklibatti town before achieving Jomsom which is in a perfect world situated at the bank of two streams. The town is delightful with level roofed houses and furthermore has vestiges of an old post. Overnight in Kagbeni.

We get our licenses checked at that point start our trek on a trail nearby the Kali Gandaki River. We stroll on sand in the midst of solid breezes previously rising on a slope. We achieve the Tangbe Village and appreciate its limited back roads, white-washed houses, grain and buckwheat fields, and apple plantations. We proceed with our walk and pass another town and cross a waterway on our way. Next, we stroll on an edge before achieving Chele Village. Overnight in Chele.

Our trek from today will be somewhat hard contrasted with what we encountered some time recently. Our walk today includes crossing two passes, Taklam La pass (3,624m) and Dajori La pass (3,735). On our way, we appreciate incredible perspectives of Tilicho, Yakawa Kang and Damodar Danda and go by Ramchung Cave. We drop further and achieve Samar Village. From here we stroll on a trail over the town and achieve an edge. Next, we dive on a lofty trail to a stream and proceed with our trek to Syanboche. Overnight in Syanboche.

We climb to the Yamda La go at 3,850m. In transit, we go by a couple of teahouses, chortens and wonderful towns. We trek through poplar timberlands and grain fields and achieve Nyi Pass at 4,010m. From here, we plummet to Ghami which is one of the greatest towns in the Lo area. The town is wonderful with fields encompassing the whole town. Overnight in Ghami.

Our trek today starts with a plummet through a harsh and frequently elusive trail. We at that point traverse the Ghami Khola and start climbing. The pathway is delightful with mani dividers along the trail. Next, we cross the Tsarang La Pass at 3870m and achieve Tsarang town. The town lies on the Charang Chu gorge with a tremendous fortification and a red gompa towards its east. Overnight in Tsarang.

We start our trek by plunging to a gorge and cross a stream before starting our tough trek to Lo La pass which at 3950m. From the highest point of the pass we can respect the delightful Lo Manthang town. From the pass we plunge to Lo Manthang which is an excellent walled town.Overnight in Lo-Manthang.

Lo Manthang is a walled town of the remote Upper Mustang district of Nepal. We spend the day visiting three noteworthy gompas of the town to be specific Jhampa, Thupchen and Chhoeda. These gompas have experienced master rebuilding in the course of the most recent two decades. We can likewise trek to Tingkhar which is a wonderful town found north-west of Lo-Mangthang. Overnight in Lo Manthang.

We trek on an alternate course while coming back from Lo-Manthang. Our trail goes through Gyakar town which houses exceptionally old Ghar Gompa with excellent shake works of art. As per a nearby legend, any individual who makes a desire at the Gompa will have it satisfied. We investigate the Gompa and proceed with our trek to Drakmar for an overnight remain.

We begin our trek right on time to keep away from solid breezes and plunge generally of the trek. Our trail goes through a dry level and fields before achieving Ghiling. The walk can be generally troublesome as we are well on the way to encounter solid breezes all over. Ghiling is for the most part dry, however despite everything we get great perspectives of Dhaulagiri and Nilgiri mountains. We can visit the town around the night. Overnight in Ghiling.

We start our trek after breakfast. We stroll on an indistinguishable trail from before going up to Lo Manthang. While in transit to Chhuksang we can appreciate extraordinary perspectives of the Himalayas and little towns we pass on the way. Overnight in Chhuksang.

Today is the latest day of our trek and it is a long one. In the wake of trekking for some time, we arrive at a finish of our Mustang trails and join the trails of the Annapurna circuit. We stop for lunch at Kagbeni. After lunch, we proceed with our trek to Jomsom for an overnight remain.

We take an early morning flight to Pokhara. The plane goes through a canyon amongst Annapurna and Dhaulagiri mountains making the flight itself an astonishing knowledge. In the wake of touching base in Pokhara, we can spend whatever remains of the day in recreation. Overnight in Pokhara.

After breakfast, we say farewell to the excellent northern horizon of Pokhara and drive towards Kathmandu. This will be a trip along stream manages an account with magnificent perspectives of terraced slopes and the rustic Nepalese way of life. In the wake of achieving Kathmandu, we take a rest or do some gift shopping. To commend the effective fruition of our excursion, we will have a goodbye supper at night. Overnight in Kathmandu. 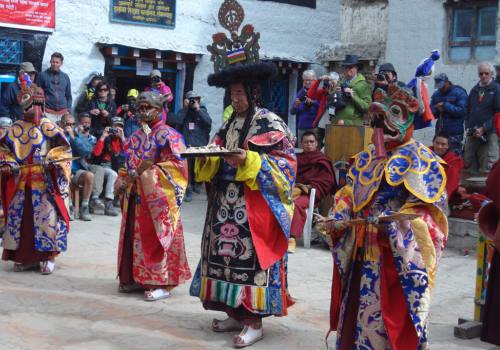