The world peace pagoda is known as very famous as Shanti stupa stunning monument located on the top of Ananda hill at an altitude of (1100mt). Its 115 feet tall and 344feet in diameter supervising hypnotic Phewa Lake with delightful Annapurna Himalayan range in the background. so known as the first stupa in Pokhara and the 71st stupa to be built by Nipponzan-Myohoji from Japan in the world. The attractive Prettiness is quite charming and the tranquil atmosphere around Monument is worth visiting for those looking for it.

The brilliant-white World Peace Pagoda in Pokhara was constructed by Nippon a Mythoi clan monk Morioka Son (Buddhist monk of Japanese origin) with assistance from local supporters. The entire initiative was led by Nichidatsu Fujii, the founder of the Nippon and Mythoi clan of Buddhism who is famously known as the initiator of the construction of Peace Pagodas around the world.   During the construction phase, there had been many disruptions by the Nepalese Government. It was not officially accepted by the Nepalese Government until 1992. In October 1999 it was finally formally inaugurated.7 kilometers from Pokhara the peace pagoda is the best place to view sunrise and sunset as well.

We can hike through Ananda Ban crossing by boat it will take about an hour and a half hiking through this green lush forest. The trail winds mostly through forests and is not a difficult hike once you reach the top it offers you such stunning mountain views with the entire view of Pokhara with a beautiful lake. And could have an option for those who couldn’t make hiking physically can arrange private transport in a private vehicle too. The place is strongly recommended to be silent as noticed by the code of conduct.

While climbing up, each landing gives one an amazing view of the valley. This is an experience that everyone visiting beautiful Nepal should enjoy. We look forward to being your hosts and guide very soon. Join hands with Mountain Miracle Treks & Expedition, one of the finest trekking agencies in Nepal to witness the enthralling beauty of the prolific nation, Nepal.

: After the Breakfast take a refreshing short walk toward the Boating station and get the boat to the hiking point. On the middle of the late there lies the power house of goddess Barahi, the pagoda style temple where the religious rituals with various colors and fragrance can be witnessed. After short pause around the temple we will continue boating towards the other end. Now it’s time to begin our hike and it’s mostly through the forest and various tropical greenery. It’s an easy hike and it takes around about 2 hour maximum to reach the hilltop where the world peace pagoda is located. While you reach at the top you could see such as like spectacular view of Annapurna Himalayan Ranges including with Manaslu , Buddha and Lamjung Himalaya. And stupa is surrounded by the huge botanical garden where you can explore your full day and chill out at the Restaurant around. And returned back to Pokhara for the evening. 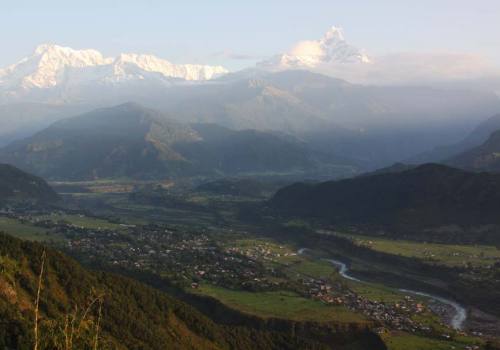 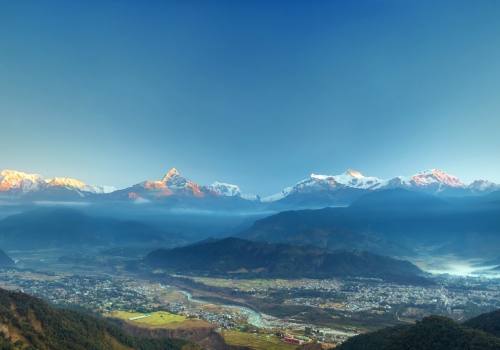